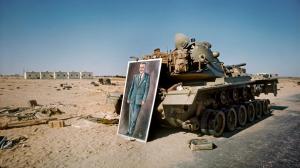 Published in the Jewish Chronicle.

Nasser emerged as the undisputed leader of the Arab world by championing pan-Arabism — a secular ideology that advocated Arab unity and freedom from Western influence. It also championed the liberation of Palestine, a euphemism for the creation of a Palestinian Arab state on the ruins of Israel.

END_OF_DOCUMENT_TOKEN_TO_BE_REPLACED

EXECUTIVE SUMMARY: Egypt under Gamal Abdel Nasser once shaped and guided Arab public opinion. Cairo was the capital of the Middle East, and Nasser’s secular pan-Arab ideology challenged the West, Israel, and other Arab states. Nasser’s Egypt showed how a developing country with a large population could persevere despite tremendous economic, political, and military challenges. As the 50th anniversary of the 1967 War approaches, Egyptians and Arabs of that generation might reflect with nostalgia on a bygone era when Cairo dominated the Middle East.

END_OF_DOCUMENT_TOKEN_TO_BE_REPLACED

On Tuesday, while Americans were commemorating the eleventh anniversary of September 11, a mob in Libya stormed the U.S. Consulate and killed Ambassador Chris Stevens and three others. Libyan President Mohammed el-Megarif apologized for the “cowardly” attacks and pledged to work with Washington to apprehend the killers. President Obama acknowledged that this isolated attack would not undermine bilateral relations and that Libya and the U.S. would cooperate. END_OF_DOCUMENT_TOKEN_TO_BE_REPLACED

In his 1999 book, The Dream Palace of the Arabs, Middle East scholar Fouad Ajami examines how Arab nationalism — a secular concept which advocates Arab unity via language and culture — not religion — went into decline following the 1967 War, the 1973 War and the 1982 Israeli invasion of Lebanon. In the 1950s and ’60s, the popular, charismatic and gifted orator Gamal Abdel Nasser, guided Arab nationalism. He served as the undisputed leader of the Arab world and inspired a generation of Arabs to believe that unity could be an attainable vision.

After Nasser’s death in 1970, Arabism suffered a major setback, and went into decline. Several self-proclaimed Arab nationalists surfaced including Hafez al-Assad of Syria, Muammar Gaddafi of Libya and Saddam Hussein of Iraq. All vied to be Nasser’s successor as spokesperson for the Arab people, but failed miserably by relying primarily on brute force and oppression. END_OF_DOCUMENT_TOKEN_TO_BE_REPLACED

Polling data in Egypt suggests that Islamist parties will gain a majority of seats in Egypt’s future parliament. While it is too soon to predict whether an Islamist government in Egypt can coexist with democracy, and whether it can adopt a truly “Egypt-first” approach which focuses on domestic concerns above foreign and external issues, recent developments raise concerns regarding Egypt’s future. END_OF_DOCUMENT_TOKEN_TO_BE_REPLACED