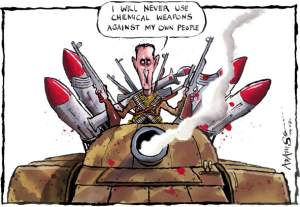 Syrian dictator Bashar Assad has faced intense sanctions and international pressure from the West, Turkey and Gulf Arab states, for the nearly 20,000 deaths since the anti-government uprising began sixteen months ago.  In spite of the atrocities and grave violations of human rights, pro-Assad and opposition forces appear to have reached a deadlock. However the tide may soon turn in favor of Assad.

In response to this severe blow which has shaken the confidence of the regime, it was reported that Assad has ordered Syria’s chemical stockpiles to be transferred and possibly used in an attack against the rebels.

Historical precedents suggest Assad may exploit this attack by unleashing more violence, and a desperate, isolated and cornered Assad may deploy weapons of mass destruction to liquidate the rebellion.  In 1980, Syrian Islamists unsuccessfully tried to assassinate Bashar’s father, Hafez.  In revenge, Hafez had as many as 1,000 prisoners believed to be affiliated with the Muslim Brotherhood killed.  The violence ultimately culminated in Hafez’s scorched earth policy against Hama in February 1982 where he massacred between 10k-40k Syrians.  The precise figure remains unknown.

Saddam Hussein, Assad’s Iraqi Ba’thist rival, used chemical weapons against the Kurds in 1988.  Saddam could not effectively declare victory over the Iranians after nearly a decade of fighting during the Iran-Iraq War.  In this deadlock he exploited anti-Kurdish sentiments by asserting that Iraqi Kurds were pro-Iranian traitors, and resorted to extreme barbarism by killing as many as 5,000 in Halabja.

While it remains to be seen if Assad will deploy WMD against his citizens, there is ample evidence to believe he will.  If he does not resign or flee within the coming days, the violence will undoubtedly take a turn for the worse.